Recognized for excelling in their respective professions and contributions to the Bay Area, they will join more than 40 other executive and emerging women leaders in the event on Thursday, May 12

SAN JOSE, Calif., August 7, 2022 – Synaptics® Incorporated (Nasdaq: SYNA) today announced that Bernice Chen, Assistant General Counsel, Intellectual Property, and Esther Song, Global Controller, will be recognized by YWCA Golden Gate Silicon Valley with “Tribute to Women” awards. The YWCA celebrates the achievements of women who have excelled in their fields and have made significant contributions to the Bay Area through their dedication and leadership. The awards will be presented at the 38th Annual Tribute to Women Awards virtual event, presented by Cisco, on Thursday, May 12, 2022, 6:00 to 7:00 PM (PT). 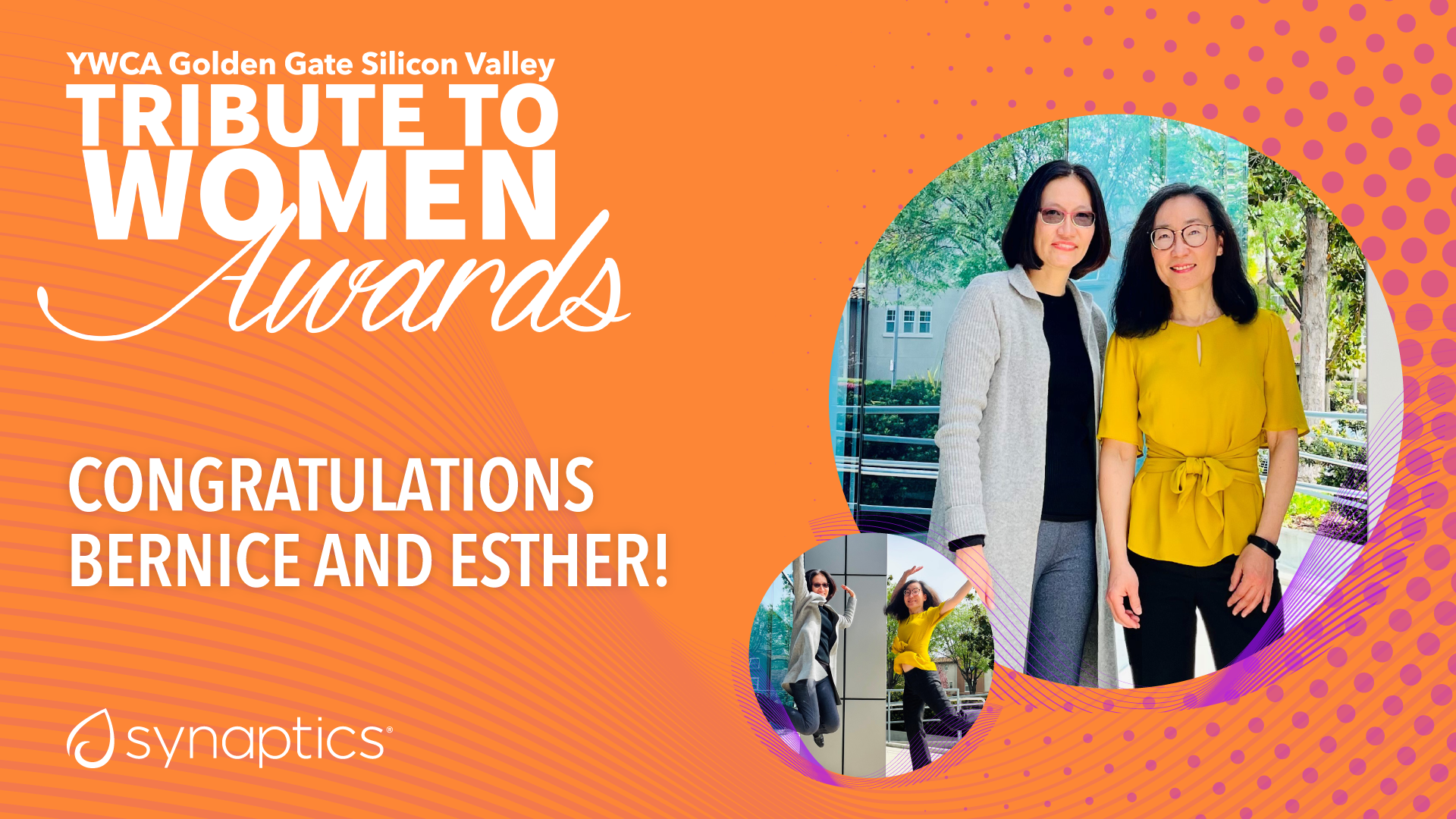 “Bernice and Esther exemplify our high standards for executive leadership,” said Synaptics’ CEO, Michael Hurlston. “While their knowledge, creativity, and dedication measurably contribute to their colleagues’ and the company’s success, it is their impeccable professionalism and commitment to raising the profiles of women in the technology industry that I am particularly proud of. I am delighted that their accomplishments are being recognized in such a meaningful way.”

More than 40 executive and emerging women leaders from throughout the Bay Area will be recognized during the Tribute to Women Awards online event. Registration to the event is free and viewers can join from anywhere.

“Although every Tribute to Women Awards program is special, we feel especially proud to recognize this year’s Honorees,” said Adriana Caldera Boroffice, CEO, YWCA Golden Gate Silicon Valley. “We know that women have borne the brunt of negative career impacts over the course of the pandemic, so to have the opportunity to shine a light on 43 women leaders across the Bay Area is truly exciting—not to mention this year’s group of Honorees include many women who have made significant impact in local COVID response efforts.”

In a recent communique, YWCA stated that although workplaces have been making progress in women’s leadership, American women still lag substantially behind men in terms of their representation in leadership positions. Tribute to Women salutes those corporations whose policies and practices encourage women’s leadership and promote equal advancement opportunities for women of diverse backgrounds. YWCA stives to promote gender equality for women and girls in the workplace, community, and ensure diverse representation at all levels, including the highest-ranking leadership positions.

To date over 1,500 women have been recognized through the Tribute to Women Awards for their outstanding achievements in the workplace and beyond.

Bernice Chen is Assistant General Counsel, Intellectual Property, at Synaptics where she leads a multinational team responsible for developing and guiding the company’s intellectual property strategy and shepherding, protecting, and monetizing the company’s thousands of patents, trademarks, and copyrights. Bernice understands and clearly communicates to internal stakeholders the laws regarding patent filings, trade secret protection, and inventor remuneration worldwide. She also guides and advises engineers on how to build their reputations as innovators, providing opportunities for them to get the visibility and recognition they deserve. Prior to her legal career, Bernice was an applications engineer in industrial automation. Bernice holds a Bachelor of Science Degree in Electrical Engineering from California Polytechnic State University at San Luis Obispo and a J.D. (Law) Degree from Santa Clara University.

Esther Song is the Global Controller at Synaptics where she is responsible for the global accounting function managing a team of approximately 50 accounting staff who handle consolidations, general ledger, inventory, revenue, fixed assets, accounts payable, accounts receivable, and overseas payroll. During her 15 years at Synaptics, Esther has successfully managed acquisition integration projects and the setup of shared service centers. She also spent four years in Hong Kong expanding the company’s Asia-based accounting team across several countries. Prior to joining Synaptics, Esther held various accounting roles, including positions that either managed or had direct responsibility for SEC filings, stock administration, equity compensation accounting, income taxes, and technical accounting. She holds a Bachelor of Science Degree in Economics from The Chinese University of Hong Kong, and a California CPA license.

About YWCA Golden Gate Silicon Valley
YWCA Golden Gate Silicon Valley is on a mission to eliminate racism, empower women, and promote peace, justice, freedom, and dignity for all. For over 140 years, Your YWCA has been meeting our community’s most pressing needs. We are one of the first multiservice agencies in the Bay Area and have three priority service areas: 1) Empowering people & communities in healing from and preventing the trauma of violence, bigotry & racism; 2) Achieving solutions to homelessness for survivors of violence; and 3) Inspiring opportunity and economic security by closing the prosperity and education gap.

Synaptics (Nasdaq: SYNA) is changing the way humans engage with connected devices and data, engineering exceptional experiences throughout the home, at work, in the car and on the go. Synaptics is the partner of choice for the world’s most innovative intelligent system providers who are integrating multiple experiential technologies into platforms that make our digital lives more productive, insightful, secure and enjoyable. These customers are combining Synaptics’ differentiated technologies in touch, display and biometrics with a new generation of advanced connectivity and AI-enhanced video, vision, audio, speech and security processing.